Bishops of Catalonia call for return to onsite Eucharist

The bishops of Catalonia held an online meeting last Monday. 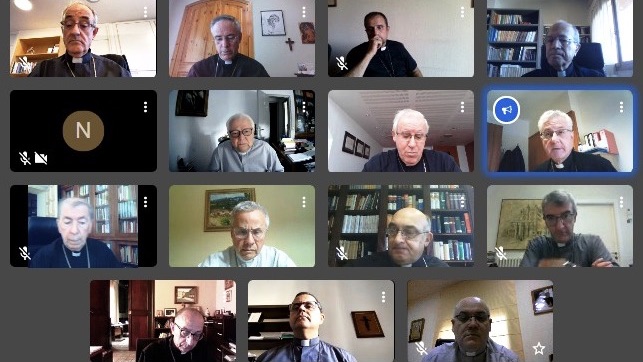 Catalonia bishops on a Virtual Meeting

Last Monday, September 14, These prelates held an online meeting and encouraged the faithful to return “to the normality of Christian life with a physical presence at the celebration of the Eucharist, whenever circumstances permit.”

The declaration of the Catalan Bishops comes after the recent communication of Cardinal Robert Sarah, prefect of the Congregation of Divine Worship,  requesting that “as soon as circumstances permit (…) to return to the normality of Christian life, which has as its home the church building and the celebration of the liturgy”.

At the meeting, the head of Caritas in Catalonia, Francisco Roig, took stock of the work that the charity has carried out in the region.

He reported that since the beginning of the pandemic, 625 new volunteers have joined Caritas. They are mostly young people.

On his 2019 Annual Report, Roig said that 82,139 homes were visited in Catalonia, a task that was praised by Cardinal Juan José Omella, Archbishop of Barcelona and President of the Spanish Episcopal Conference. This represents 217,171 people who benefited from the agency’s support.

For their part, the bishops congratulated Cardinal Omella on the upcoming anniversary of his 50th priestly ordination.

With information from Ecclesia Magazine