Since the Filipino Cardinal is in close collaboration with Francis, the Pope had to take a new test: results were negative again. 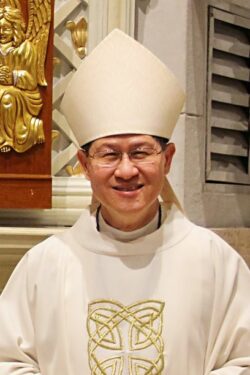 Newsroom (September 26, 2020, 6:00pm Gaudium Press) — The Prefect of the Congregation for the Evangelization of Peoples, Luis Antonio Cardinal Tagle, has recovered from Covid 19 and showed a negative result to his latest coronavirus test.

After two-week isolation, the Filipino Cardinal did not present particularly serious symptoms and is now in a period of rest.

The reaction of the Philippine College in Rome

“Cardinal Tagle’s negative result in the test is a great joy for the whole Church. God wants him to continue to serve in the Vatican, to bring the Good News of God: love, joy, peace, justice, forgiveness and reconciliation, everything that the world needs in a special way these days,” expressed the Pontifical Philippine College in Rome in its Facebook account.

Cardinal Tagle, 63, a relatively young cardinal, was diagnosed coronavirus positive two weeks ago when he arrived home to visit his parents.

Upon his arrival, he was given a pharyngeal type test, which was positive. Previously, he had undergone another one, on September 7, with a negative result.

The result of Cardinal Tagle’s positive test led the Pope himself to take a new test, and like all the previous ones, the result was negative.

The test was also given to the person and students of the Pontifical Philippine College in Rome, where Cardinal Tagle lives. All the tests were negative.