The event can be reported in many ways. None of them reveals the depth of what happened. 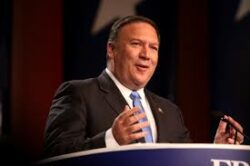 Newsroom (October 1, 2020, 7:32 pm Gaudium Press) — The event can be reported under many aspects. But not all of them reveal the depth of what happened. In fact, this morning the US Secretary of State met with the Secretary of State of the Holy See. Few meetings could be more important if we consider the importance and dignity of both characters. Also in attendance,  was Msgr. Paul Richard Gallagher, Secretary for Relations with States, the ‘foreign minister’ of the Church.

For example, we can say that the conflicts bleeding the planet were discussed for 45 minutes “in an atmosphere of respect and cordiality.” We also could say that the encounter focused on an exchange of different points of view regarding China. (Obviously, among such high dignitaries one expects nothing more than a respectful and friendly treatment.)

We could finally say that Secretary Pompeo expressed his disagreement with the renewal of the secret Chinese-Vatican agreement – about to be renewed- and that Cardinal Parolin voiced his position on the matter. But to say only that…would mean saying little. Very little.

Aside from the political connotations of the meeting, the Pope has declined to receive the secretary because he does not receive political personalities during electoral times. The underlying reality, though, is perceived quite differently. On very few occasions in recent history has a very high political personality made a strong statement on a topic that allegedly does not fall within his competence: an agreement between the Church and a country on ecclesiastical matters.

Truly, Secretary Pompeo has been more than active in his accusations against the agreement. His positions are summarized on a September 19 message on his Twitter account: “Two years ago, the Holy See reached an agreement with the Chinese Communist Party hoping to help Catholics. But the CCP’s abuse of the faithful has worsened. The Vatican would jeopardize its moral authority if it were to renew the agreement.”

The tweet followed an article published in the conservative magazine First Things, in which Pompeo explained in detail his position, and that of the American government:

“The terms of that pact have never been publicly disclosed; but the Church’s hope was that it would improve the condition of Catholics in China by reaching an agreement with the Chinese regime on the appointment of bishops, the traditional stewards of the faith in local communities.”

“Two years on, it’s clear that the Sino-Vatican agreement has not shielded Catholics from the Party’s depredations, to say nothing of the Party’s horrific treatment of Christians, Tibetan Buddhists, Falun Gong devotees, and other religious believers.”

Pompeo’s article even seems to have been written by someone other than the secretary, given the detail with which he describes various realities within the Church.

“As part of the 2018 agreement, the Vatican legitimized Chinese priests and bishops whose loyalties remain unclear, confusing Chinese Catholics who had always trusted the Church. Many refuse to worship in state-sanctioned places of worship, for fear that by revealing themselves as faithful Catholics they will suffer the same abuses that they witness other believers suffer at the hands of the Chinese authorities’ increasingly aggressive atheism.”

The theme of human rights

It is clear that Pompeo does not approach his remarks in religious terms but in terms of the defence of human rights. From that perspective, no one may accuse him of extrapolating his role. However, from that vantage point, he once again focuses on the Church: “The Holy See has a unique capacity and duty to focus the world’s attention on human rights violations, especially those perpetrated by totalitarian regimes like Beijing’s. In the late twentieth century, the Church’s power of moral witness helped inspire those who liberated central and eastern Europe from communism, and those who challenged autocratic and authoritarian regimes in Latin America and East Asia.”  Clearly, the times of the Vatican-US relationship during the Reagan era are far gone.

The issue also helps to highlight the importance of the next elections in the US. If Trump wins, his government will not forget what has taken place at this moment of crucial developments, both in history and in world affairs. As a result,  on a geostrategic level, tensions could increase.

Rumours have it that in today’s China some authorities are suffering from persecution syndrome, making the country look more and more like North Korea.

It is also clear that we are in election season, and therefore what matters is to gather sympathies that can translate into votes. Conversely, the Vatican’s claim that it does not lend itself to political machinations has its weight. Ultimately, however, the eyes of the world will increasingly focus on the issue of human rights, particularly the right to practice religion, in China. After all, the facts and only the facts will speak for themselves.