Gaudium news Saint Faustina Kowalska: the great invitation to the Divine Mercy that Jesus made through her

Saint Faustina Kowalska: the great invitation to the Divine Mercy that Jesus made through her

In her famous Journal, She wrote a magnificent work that compiles her life, and the many revelations made by Jesus 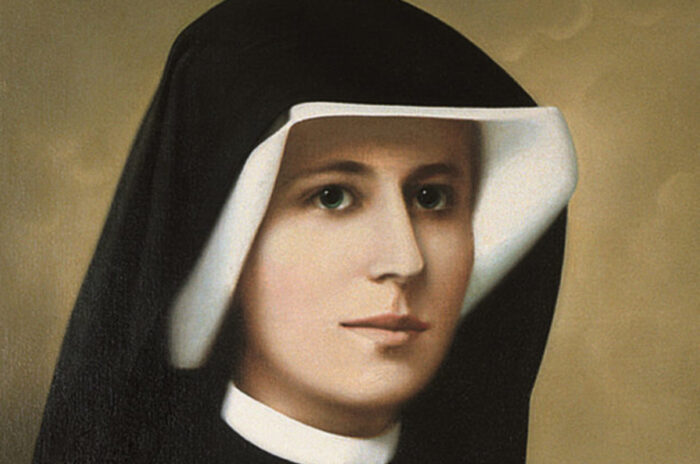 Helena Kowalska was born on August 25, 1905, in Glogowiec, Poland. She was the daughter of peasants who brought into the world ten children, of whom she was the third.

At a very young age, she realized her vocation to religious life. Yet, she had to help support the household and work as a domestic. When she was 18, Helena insisted with her parents to let her fulfill her mission; her parents, however, refused.

Jesus appears to her

She wanted to quiet the voice of her vocation by distracting herself with what she called ‘life’s vanities.’ One day, while attending a dance with one of her sisters in the city of Lodz, in the middle of the party, she saw Jesus at her side covered with wounds. And then, she heard the following words: “How long shall I be patient with you and for how long will you disappoint me?”

She left the ball in dismay, went to a nearby church, and lay in prostration beside the Blessed Sacrament, to whom she prayed ardently to help her get her life back on track. At that moment, she heard another voice telling her: “Go immediately to Warsaw, and there you will enter the convent”.

At that moment, Helena performed a heroic act: With just a dress, but full of confidence, she left immediately for the capital.

Once in Warsaw, several monasteries refused to receive her.

However, on August 1, 1925, the Congregation of the Sisters of Our Lady of Mercy accepted her. As she made her way through the community, doubts about her vocation assailed her, but she overcame them with God’s grace. She was received as a novice on April 30, 1926, with the name of Sister Maria Faustina of the Blessed Sacrament.

Sensing her weakness, she put herself entirely in the hands of Jesus, following the path of the spiritual infancy of Saint Therese of the Child Jesus: even in the smallest things, she should ask for strength from heaven to execute them.

For instance, when they assigned her to the kitchen, she had difficulty washing potatoes in pots; later when draining the water, many of those potatoes fell – a simple job, which caused Sister Faustina much affliction. She even wanted to avoid the duty, but the sisters were disappointed. As she asked Jesus for help, He responded through an inner voice assuring her that he would receive the strength to perform this task effortlessly.

The importance of the love for God in everything, as Saint Therese said

In the evening, Sister Faustina managed to pour the water easily from the pot; and when she uncovered it, she had a nice surprise: the potatoes had turned into roses. Then she heard the Lord say: “I have transformed your hard work into bouquets of the most beautiful flowers, and their perfume rises to my Throne”.

Regarding this and other facts, Saint Faustina confided: “You make me realize and understand that the greatness of the soul does not lie in great actions, but in great love. Love is invaluable and gives greatness to our actions. Although our activities are trivial and ordinary by themselves, through love, they become important and powerful before God”.

On May 1, 1933, she took her final vows. At that time, she was already clear about her mission as an apostle of the Divine Mercy. “In the Old Testament, I sent prophets to my people with threats. Today, I am sending you to all humanity with my mercy. I do not want to punish suffering humanity; rather, I want to heal it, embracing it with my merciful Heart,” Jesus told her.

“Secretary of my deepest mystery” was the title the Lord gave her.

The central point of the message was the need of the souls to turn to His divine mercy:

“May every soul glorify my goodness. I want the trust of my children; you should urge them to have great confidence in my inconceivable mercy. May the weak, sinful soul have no fear of approaching Me, for even if their sins were more numerous than grains of sand on Earth, I would still submerge them in the abyss of my mercy”.

Jesus told the Saint that he wanted to spread the devotion to his infinite mercy:

“I want the priests to announce that my infinite mercy is with the sinful souls. May the sinners have no fear of approaching Me. The flames of mercy are burning in Me; I want to pour them out on souls”. Accomplishing this plan of God was not easy for the nun.

The picture of mercy

One day, on February 22, 1931, Jesus appeared to her dressed in white, with his right hand giving a blessing. Two rays came from his chest, one white and the other red. The white one meant “Water, which justifies the souls; the red one means Blood, which is the life of the souls.” He ordered that this picture be painted with the inscription “Jesus, I trust in Thee.”

When the painting was done, the Saint told the Lord that the work was far from being as beautiful as the vision she had. Jesus said it did not matter. The image’s worth was not in its beauty but the grace given by Him.

Jesus Christ asked that the painting be blessed on the Sunday after Easter, which He proclaimed the Feast of Mercy.

Jesus taught her the Chaplet of Mercy, showed her how to pray it so that it would touch her heart, and also instituted the “Hour of Mercy” at 3 p.m. so that His Passion would be honored. He said that this was the “Hour of great mercy for the whole world,” the hour in which “mercy overcomes justice. He said that in that hour he does not deny anything to those who ask in the name of his Passion, especially the sinners.

God wanted to test her with tuberculosis which some sisters dismissed as laziness.

They also misunderstood her concerning her revelations, but she always responded with kindness to everyone.

Saint John Paul II canonized her on April 30, 2000, a Sunday of Mercy, which today is a liturgical feast.

(With information from the article by Sr. Monica Erin McDonald, EP, ‘The Secretary of Divine Mercy.’ Heralds of the Gospel Magazine)