We must be aware of their existence. And to do this, we must not seek out bizarre doctrines; just remember the facts of the Catholic faith. 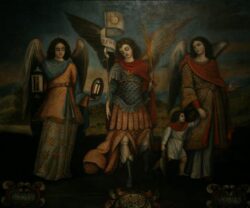 Newsroom (September 29, 2020, 12:10 pm Gaudium Press) —  On the day of the Archangels Michael, Gabriel, and Raphael, let us talk a little about angels, wonderful beings who inhabit the universe, and whose existence we often disregard. Sometimes this is because of ignorance; sometimes the devil seeks and finds ways to keep them unnoticed.

The realm of the angels is marvellous. We do not need to look for strange books – so often a bridge to contact demons – to get enthusiastic about them, to ask for their help, or to seek to be in constant relationship with them. Instead, it is enough to remember the facts that Catholic doctrine offers us.

God created Angels before the material universe. For them not to be left without a government, He gave them authority over the stars, the elements, and also the great mission of helping men to reach eternal salvation.

Salvation… yes. We know that part of the angels did not pass the test that God put them through, and for this reason, He condemned them to total misery, in different places. These, as it often happens with men, seek to drag human beings into their unhappiness. They envy mankind because they know that humans are bound to occupy the thrones they abandoned. The struggle would be very uneven if God were to leave us at the mercy of the superior nature of the fallen angels. In his merciful providence, He gives us the good angels, who help us in all the trials of life. They are our personal guardian angels. Some angels guard families and institutions.

Angels are very powerful; if God did not limit their influence on men, we would feel overwhelmed, particularly by the action of demons.

Undoubtedly, their intelligence is perfect, instantly reaching the essence of things, having a perfect global vision, thus making very accurate predictions. The highest human intelligence is basic in comparison to angelical intelligence.

Angels also have dominion over matter and can combine it, transport it, manipulate it. Only the Divine Authority can curb their activities in this regard. Throughout history, He has used His angels to manifest His divine power in this world: for example, the exterminating angel in Egypt; or the angels that guard paradise; or the angels that destroyed the armies of the enemies of the Jewish people; or those of the destruction of Sodom and Gomorrah. Angels are very powerful beings.

Beyond their angelic nature, there is something that elevates them even more: divine grace. This is a mysterious participation in God’s life, which humans can also access through baptism; once lost, we recover through confession. The good angels also live in state of grace; in fact, they were created in divine grace, while the fallen angels lost it when they did not pass the test. The good angels are also bearers of divine grace towards men.

Usually, we do not know how the devil sets his traps for us; we are dealing with a far superior nature than ours. The fact that we are so limited should lead us to love our angels very much. They have already defeated demons, know their tricks, and they know how to submit them.

Today, in order to thank God for the immense gift of having given us angels at our service, and to praise the Divine Majesty in His most perfect servants, we must honour the three archangels mentioned in the Scriptures. We must also honour through them all the myriads and myriads of angels that exist and who want to join us in the fight against evil powers. (WCS)