Her conversion was complete and radical: she handed out her jewels and possessions to the poor and wearing a simple dress left Antioch for Jerusalem. 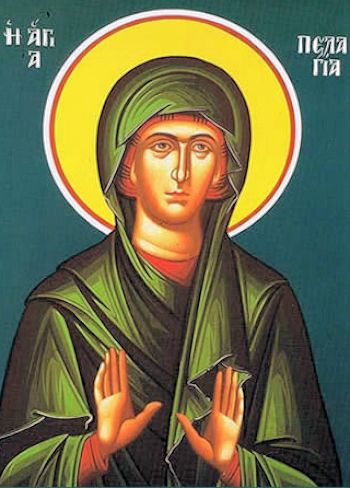 Newsdesk (October 8, 2020, Gaudium Press) — The life of Saint Pelagia, is a story of conversion.

It was the middle of the fifth century in Antioch.

When she was very young, Pelagia had begun to receive Christian doctrine but soon abandoned the path of the catechumens.

Instead, she gave in to sensual, shameless dances.

However, God had reserved an encounter that would save her. In 453, she met Nono, who was on his way to Edessa, where he was a bishop. He had lived as a hermit of the desert in Tabenas.

Out of curiosity, one day, Pelagia entered a temple and heard the bishop preach about the Divine Mercy, and how God continually calls for conversion. She was moved and decided to transform her life.

Then she wrote to the bishop: “To the holy disciple of Jesus: I have heard that your God came down from Heaven to Earth for the salvation of men. He did not refuse to speak to sinful women. If you are his disciple, listen to me. Do not deny me the good and comfort of hearing your word so that I may find grace, through you, with Jesus Christ Our Savior.”

Bishop Nono received her, took her back to the path of the catechumenate, had her baptized, and she received her first communion.

Her conversion was complete and radical: she handed out her jewels and possessions to the poor, freed her servants, and wearing a simple dress left Antioch for Jerusalem.

In the surroundings of this city, she found a cave where she became a hermit, an anchorite, like her teacher Nono.

Out of prudence, she disguised her womanhood, taking the name of Pelagius.

Then, a deacon of the bishop heard about a saintly hermit whose name was Pelagius and asked the bishop’s permission to visit him. He was able to talk to the anchorite, admired his life, and then saw him return to the cave to continue his pious life. And the deacon returned to his see. Sometime later, when he returned, he found the hermit dead. As he prepared to anoint him with myrrh, he found out that the hermit was a woman: Pelagia, the penitent of Antioch.

Later, the women from the monasteries near Jericho and the Jordan River arrived and gave her a solemn burial.

With information from the Archdiocese of Madrid