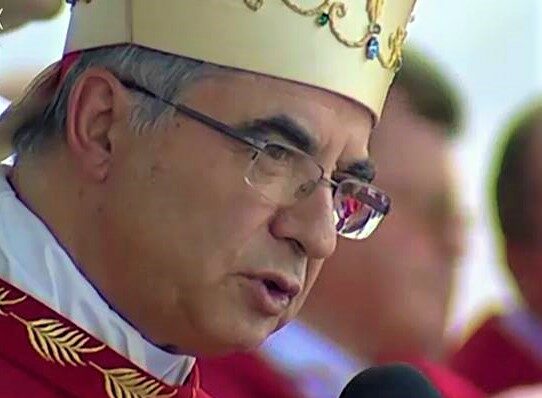 Newsroom (September 26, 2020, 7:50pm Gaudium Press) — The drama involving the resignation of Cardinal Becciu’s to his cardinal rights is taking trimmings unheard of in previous similar cases; more details seem to emerge as the hours go by.

At the time of writing, more details have been revealed: resignation occurred after a tense 20-minute audience with Francisco; during the encounter, it was pointed out that charity funds from the Vatican would have been distributed to the cardinal’s relatives; these would have been among the main reasons for his resignation.

Being a substitute for the Secretary of State, “it is true that I have destined money to Caritas. These 100,000 euros. It is something that is the function of the substitute for the Secretary of State. In seven or eight years I had never done any work to support Sardinia. I know that my diocese is in an emergency, especially because of unemployment, and I wanted to use this money. That money is still there,” said the Cardinal. Allegations emerged that those 100,000 euros were destined to a cooperative run by one of Becciu’s brothers, a cooperative that works with Cáritas. The Cardinal explained that the money never reached his brother’s cooperative.

Allegations have also emerged that he commissioned another brother to do carpentry works while Nuncio to Angola and Cuba, for a sum of 150,000 euros. The prelate affirms that the deal “was approved by high authorities”.

Yesterday morning, in an unprecedented turn of events, the Cardinal called for a press conference. “It is all strange. I feel lost. Yesterday until 6:02 pm, I felt like a friend of the Pope, faithful to him. Then he tells me that he no longer has confidence in me because the magistrates have indicated to him that he would have committed an act of embezzlement,” he said.

“I hope that sooner or later the Pope will realize that it is a mistake,” said the cardinal, who added: “I hope he has not been manipulated.”

During the press conference, more details emerged regarding the dismissal of the Vatican’s former first auditor general Libero Milone, for which Cardinal Becciu is held responsible. According to the Spanish newspaper El País, “Milone knew that he could not interfere… that he had a limit in his investigation, and that limit was the money of the Secretary of State”.

Following his arrest, trial and final acquittal on charges of sexual abuse, Cardinal George Pell, is a legendary figure. He is also the former prefect of the Vatican Secretariat for the Economy. For this reason, his brief declaration on Cardinal Becciu’s resignation from his post has become a significant statement:

“The Holy Father was elected to clean up Vatican finances. He plays a long game and is to be thanked and congratulated on recent developments. I hope the cleaning of the stables continues in both the Vatican and Victoria”.

According to the Italian daily  L’Espresso, the investigation leading to Becciu’s resignation was made possible by the help of one of the cardinal’s closest assistants.

L’Espresso affirms that it was not only money destined to family members that would have determined the Cardinal’s resignation; but also monetary transactions entrusted to a financier, Enrico Craso, which were invested on speculative funds based in tax havens.

On this matter, the Cardinal declared that he did not follow up on Enrico Crasso step by step: “I met him once a year”, he expressed.  “The ones who followed the operations were my officials from the administration. He [Crasso] would tell me about the investments he made. He would say: ‘An investment was made for this or that project and for this or that other project’: but he would not tell me the ramifications of all these investments. Then I wouldn’t know, here and then, where Crasso had invested.”

However, L’Espresso claims to be in possession of documents showing involvement with investment funds with offices in Luxembourg, Asia or Malta has been taking place for years. These would be the “same investment funds where the income from the companies of Cardinal Becciu’s brothers would later be relocated”.

The Cardinal asserts that he knows neither Alessandro Noceti, director of Valeur capital and former official of Credit Suisse nor Lorenzo Vangelisti, managing director of the Valeur group. L’Espresso affirms that the Valeur group is a “society with headquarters in Lugano, which was used to hide hundreds of millions of dollars from the Pope, through a mechanism of Chinese drawers”; and that these two characters would have been key in the purchase and sale of the Sloane Avenue property in London, for which Cardinal Becciu is also being questioned.