The picture of Padre Pio has the character of a legend. 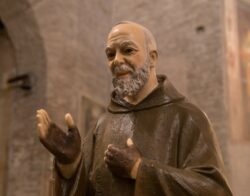 Newsroom (September 23, 2020 12:10 pm Gaudium Press) — It is rather impossible to summarize the extraordinary life of Father Pio of Pieltrecina – our saint today – in just a few columns.

We will tell some events, collected randomly, to highlight his great personality, his holiness.

Francis was born, as this was his first name, in Pieltrecina, in 1887. He was baptized the day after his birth. In those joyful times, Catholic parents wanted the soul of the new member of the family to benefit immediately from the action of grace. He received Confirmation and First Communion when he was 12 years old.

He did not like the company of some children: “They blaspheme.”, he would complain.

At 16, he entered the Capuchin order; and there he began to be called Fray Pio. He became a priest in Benevento in 1910. In September 1916, he was sent to the convent of Santa Maria delle Grazie in San Giovanni Rotondo, his permanent residence here on earth.

On May 27, 1917, when he was 30 years old and while praying in the church choir, he received one of his most known features: the stigmata of the Lord that accompanied him throughout his life and made him suffer.

Soon people began to sense that this priest was special. In his long masses, time seemed to fly. In the confessional, he could ‘read the souls.’ History would show over and over again the truth about this.

One day, a young woman from Florence approached Padre Pio in a panic regarding the eternal fate of a relative who had committed suicide by diving into a river. Before she said anything to the priest, he told her: “From the bridge to the river there are still some seconds….” Thus he opened the possibility of salvation for that person. Events like this were commonplace. And so were the miraculous healings.

His relationship with the angels

The connection he had with his guardian angel was so close that he called him “my childhood friend”.

Once a teacher wanted to test him, writing questions to him in French and Hebrew, languages that, of course, the priest did not know. But the boy answered the questions correctly:

– How can you understand the content if you don’t even know the letters of the Greek alphabet? – the teacher asked.

– My Guardian Angel explains everything to me,- he answered innocently.

The most important activities of his life were spiritual counseling, the Sacrament of Confession, and the celebration of the Eucharist. He also accomplished many other things, such as the foundation of the House of Relief from Suffering, which he initiated in May 1956.

He prayed a lot and also studied. He did not undervalue studying, but said: “In books, we seek God; in prayer, we find Him.”

His fame spread from mouth to mouth, so much that he gradually ran out of what today we call ‘moments of privacy.’ People sought him at all times. He was also outstanding in the gift of advice, where his wisdom, his prudence, his charity shone through.

However, we must not imagine a life without the cross of a man of God loved by all. He soon understood the role of suffering in the conquering of graces for individuals. For this reason, he always accepted the crosses that God wanted to send him and that indeed sent him.

Even though he manifested his love for the Eucharist, where he often experienced ecstasy, his great apostolic ministry was confession. He said his many mystical gifts were simply hooks to drag souls to the confession of sins. He would spend up to 15 hours sitting in the confessional.

He was straightforward, but always with kindness. This is why he produced wonderful results.

One day a merchant approached him to ask for his intercession for the health of his daughter, who was very ill:

– You are way sicker than your daughter. I see you dead,” said Father Pío.

At such a warning, the merchant confessed. And when he came out, he said to all who would listen to him: “He knew everything and told me everything!”

As it happened numerous times with the priest of Ars, some wanted to put him to the test, proving that he was a total fraud. To one of these, as soon as Padre Pio saw him, he questioned him and exposed his wicked intentions to those present. And then he pointed him the confessional, where the man went, already a penitent.

Exceptional in the fulfillment of his vows, he was perfect in obedience, in poverty, and of course, in the angelic virtue. Padre Pio was even obedient to commands that were not always in agreement with God’s plan.

Although a doctor gave him a few weeks to live when he was 30 years old, he lived for more than 50 years. Life lasts as long as God wants it to. However, he endured a lot in his health, as the Lord planned. But also, at times, God provided him with inexplicable relief.

One day, on April 25, 1959, the doctors diagnosed him with severe pneumonia. That same day the image of the Virgin of Fatima arrived in San Giovanni Rotondo, which the saint was able to visit in a wheelchair. When the image was leaving in a helicopter, he said from a window of his convent: “Madam, my Mother, I am sick since the day of your arrival in Italy … You leave now and leave me like this?”

At that moment, he felt a “shiver in his bones, ” and then he told to his brothers present: “I am cured!” And indeed, he was.

He died at the age of 81, on February 23, 1968, and people gathered around his coffin and his tomb, as popular canonization. John Paul II proclaimed him a saint in 2002.